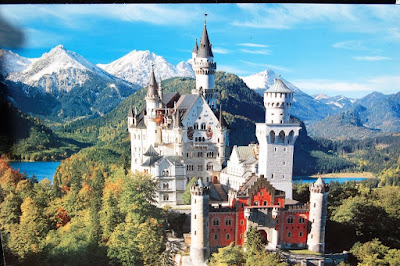 I thought I would love this castle so much more than I did. This is the castle that inspired the Sleeping Beauty castle at Disneyland. It is very beautiful from the outside, especially since it is set up on the top of a hill. You definitely can see the Disney castle, can't you? 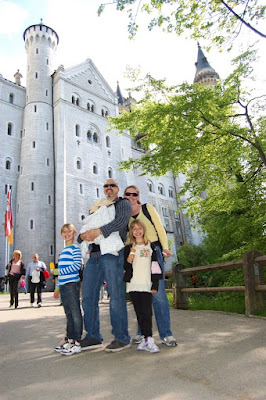 This was one of King Ludwig's multiple castles he was having built before his death. It was never fully finished, so we were only able to tour the 2nd and 4th floors.
The reason I didn't like it as much as the smaller palace "The Linderhof" that I wrote about previously, was because it was very dark inside and not as decorated. Where "Linderhof" was very ornate, bright and looked like a castle, this one was all dark wood, drab and empty-feeling. Don't get me wrong. It had a ballroom meant for entertaining with beautiful murals painted every inch of the walls and ceiling, as well as a throne room (sans the throne. King Ludwig died before it was ever made).
And because it was on a hill, it was too far of a walk, so you could either take a bus or a horsedrawn carriage. This was another one of Brian's surprises. The girls really wanted to take a carriage in Paris, but Brian sidestepped the whole subject. He then told me when we saw these ones that he knew all along he was going to take us on this one. How awesome is he. :) 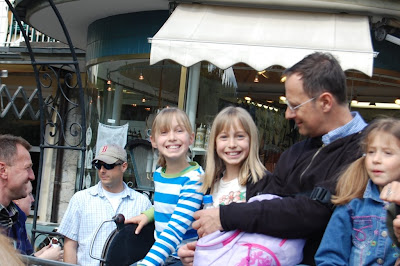 And of course, it wouldn't be in Xoe & Xanthe's style to ride in the back with us. They are ALWAYS making friends with the management. The driver asked if they wanted to sit up front with him and help him steer the horses. And it ALSO wouldn't be in their style to just sit there and not ask 20 questions with who they were with. Sure enough, within 30 seconds, they had already learned the names of the horses, how long the driver had been a driver, and why did the horses have to stop to poop. hehe. Silly girls. I love them! 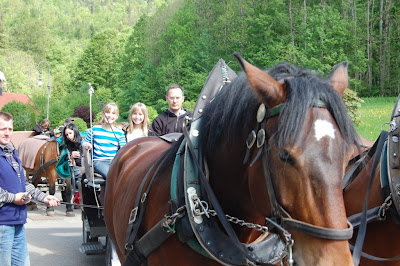 We couldn't take pictures inside this castle either. The only picture I got was I caught a quick picture of Spencer with the ballroom in the background. He was so good the whole time, and Brian was so awesome to carry Spencer the whole way. Remember, even though we got up the hill with a carriage, there were hundreds of steps from the bottom entryway up the towers to the top floors. Seriously. The servants must have been in really good shape to have to run up and down them. 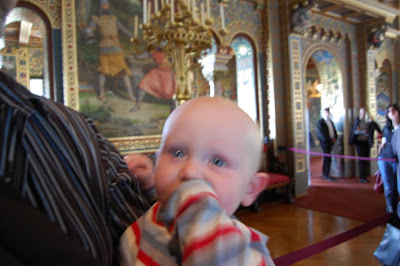 At the end of the tour, while the girls were browsing the gift shop, I took Spencer down and outside. I just had to include these pictures. How cute is he! 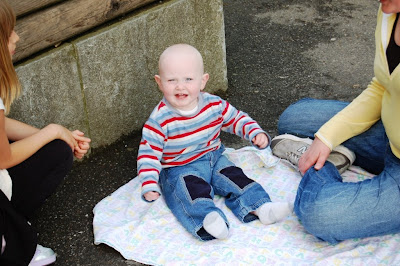 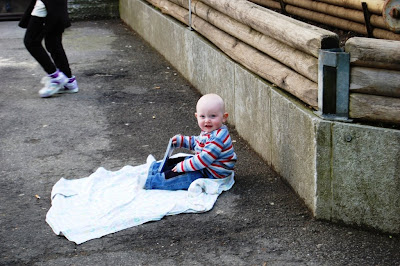 Then I roughed it as we climbed another trail to Marie's Bridge. This was a bridge that crossed a ravine for King Ludwig to wander more of the forests. I was so proud of myself cuz that was a serious climb to get from the castle even further up to it. Too bad it didn't do my body any good though. I should have come home ripped! 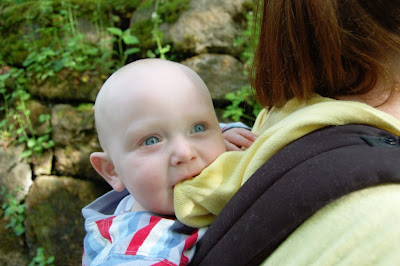 I refused to go on the bridge (fear of heights and all...). The girls and Brian were excited to go on it. So while I waited behind, they went and took a look. 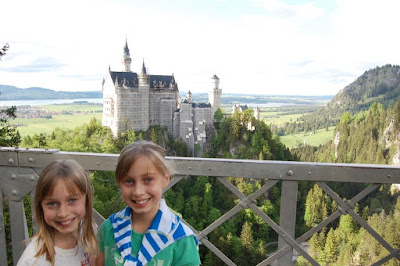 This is what they were crossing (see below). Ya, even though it was made of metal, I still was afraid of the scene in Indiana Jones where he cuts the rope on that rickety bridge, and Shorty, Docta Jones and "Lady" have to wrap their feet around the ropes so they don't fall in the alligator infested waters. Ya, that scene will do it for me every time. 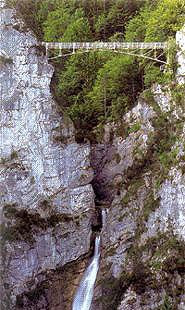 The girls think it's so funny to tease me about my fear of heights (within reason. The Eiffel Tower pushed me too far so they know there are limits). Xoe insisted on taking this picture looking down from the bridge so I could be scared even when looking at pictures. Ya, it still kinda makes me a little nervous. 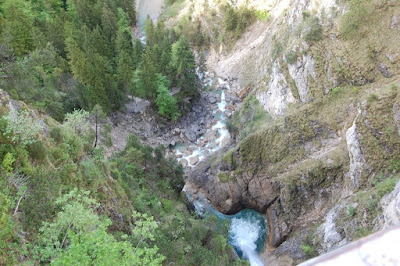 This is me after climbing up the mountain to the bridge with Spencer on my back. I was so dang proud of myself. But I really looked horrible. hahaha. 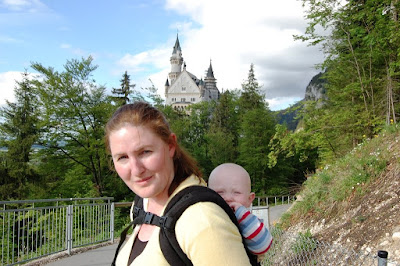 The girls had so much fun running down the hill. Right after this next turn, all the other guests pretty much disappeared. They must have known something we didn't know. We had started this castle tour at the end of the day (we had done the Linderhof earlier), so we missed the last bus, and missed the last carriage ride. Therefore we had to walk down the whole hill. We found a couple hundred stairs that was a shortcut, a much harder walk, but definitely worth taking. 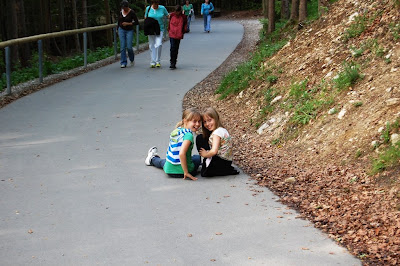 Look at those darling little girls.

You know... one of these days I really should meet those girls of yours.:)
(NOT pregnant, btw)

I am so disappointed in this castle. I always loved that one from the outside. I am glad that I never took the time to go in it because I would have been bummed that the inside doesn't live up to it's outer beauty.

I love the family pic in front of the castle. was that takin with a timer? Also this is random but I think that blue striped top is Max's PJ's. If it's from childrens place. Unless you got some too. But How did she make it look so chic?! Your girls are so resourceful!

You are German now! Maybe we're going to see Neuschwanstein on Tuesday and I checked your blog for information.

please let me know if you did the first picture (view of the castle) by yourself? if yes-from wich point? Thank you very much for your answer! 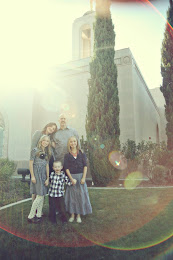 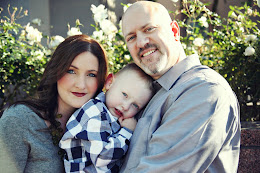 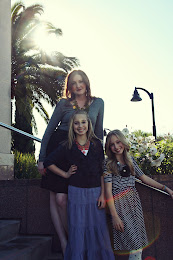 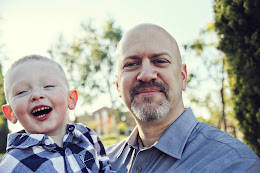 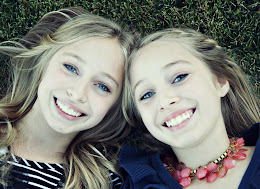